However, there are signs of progress. The CDC reports that new HIV diagnoses have remained stable in recent years among gay and bisexual men overall. CDC data also shows that HIV infections are falling among some age and racial and ethnic groups of gay and bisexual men.

National Gay Men’s HIV/AIDS Awareness Day is a time to focus on the impact of HIV/AIDS on gay and bisexual men. Browse the links below to learn more about the annual observance and find HIV-related information specific to gay men. 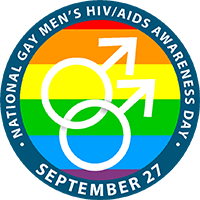 From the National Library of Medicine’s AIDSource