HIV and AIDS: The Basics
The HIV Life Cycle
The Stages of HIV Infection
What is a Latent HIV Reservoir?
HIV Testing
FDA-Approved HIV Medicines
What is an Investigational HIV Drug?
What is a Therapeutic HIV Vaccine?
What is a Preventive HIV Vaccine?
HIV and AIDS Clinical Trials

HIV and AIDS: The Basics

AIDS stands for acquired immunodeficiency syndrome. AIDS is the most advanced stage of HIV infection.

HIV attacks and destroys the infection-fighting CD4 cells (CD4 T lymphocyte) of the immune system. The loss of CD4 cells makes it difficult for the body to fight off infections and certain cancers. Without treatment, HIV can gradually destroy the immune system and HIV infection advances to AIDS. 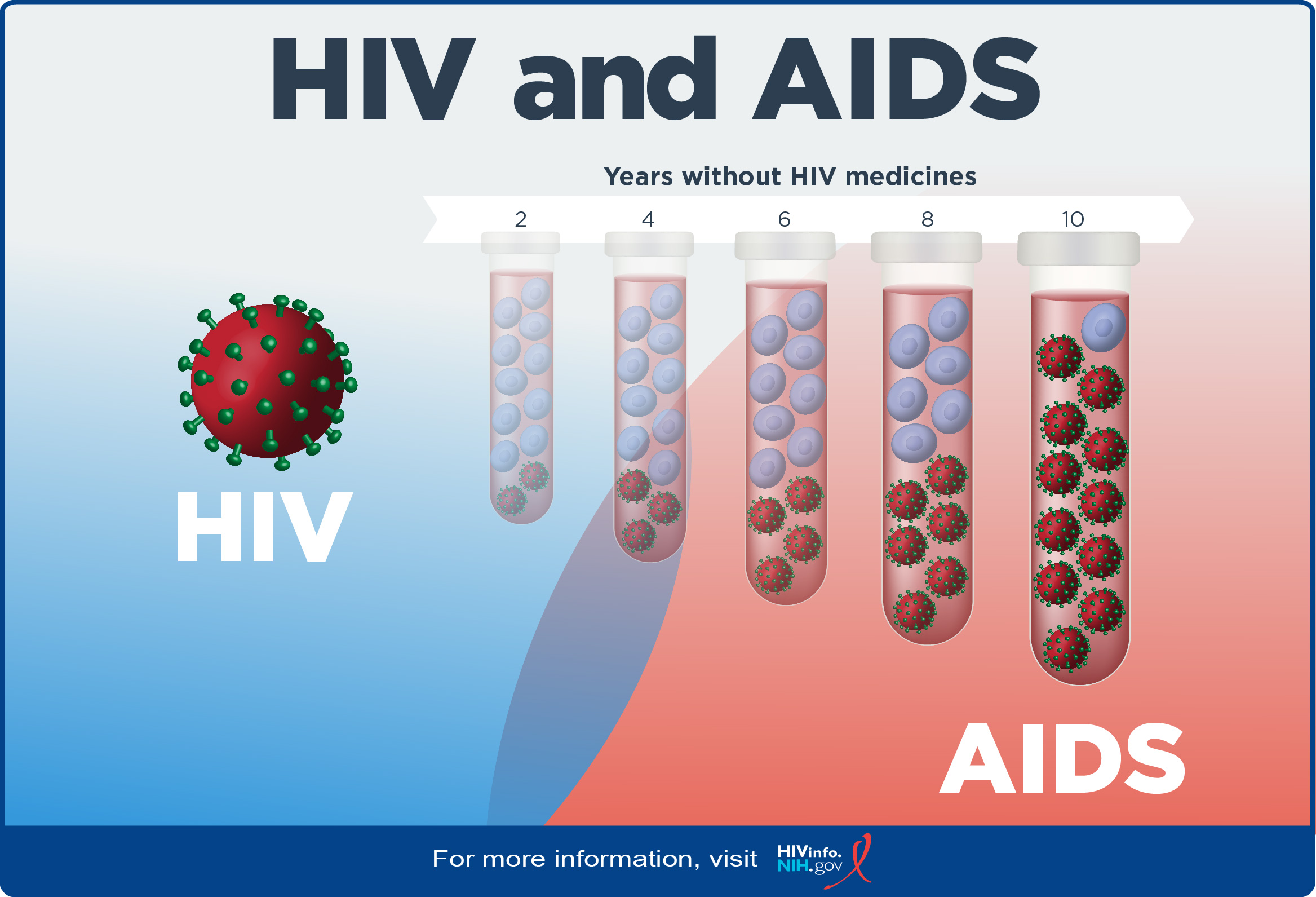 The spread of HIV from person to person is called HIV transmission. HIV is spread only through certain body fluids from a person who has HIV. These body fluids include:

HIV transmission is only possible through contact with HIV-infected body fluids. In the United States, HIV is spread mainly by:

The spread of HIV from a woman with HIV to her child during pregnancy, childbirth, or breastfeeding is called perinatal transmission of HIV. For more information, read the HIVinfo fact sheet on Preventing Perinatal Transmission of HIV.

You cannot get HIV by shaking hands or hugging a person who has HIV. You also cannot get HIV from contact with objects, such as dishes, toilet seats, or doorknobs, used by a person with HIV. HIV is not spread through the air or water or by mosquitoes, ticks, or other blood-sucking insects. Use the HIVinfo You Can Safely Share…With Someone With HIV infographic to spread this message.

To reduce your risk of HIV infection, use condoms correctly every time you have sex, limit your number of sexual partners, and never share injection drug equipment.

Also talk to your health care provider about pre-exposure prophylaxis (PrEP). PrEP is an HIV prevention option for people who do not have HIV but who are at high risk of becoming infected with HIV. PrEP involves taking a specific HIV medicine every day. For more information, read the HIVinfo fact sheet on Pre-exposure Prophylaxis (PrEP).

HIV medicines, given to women with HIV during pregnancy and childbirth and to their babies after birth, reduce the risk of perinatal transmission of HIV. In addition, because HIV can be transmitted through breast milk, women with HIV who live in the United States should not breastfeed their babies. Baby formula is a safe and healthy alternative to breast milk and is readily available in the United States.

ART is recommended for everyone who has HIV. ART prevents HIV from multiplying, which reduces the amount of HIV in the body (called the viral load). Having less HIV in the body protects the immune system and prevents HIV infection from advancing to AIDS. ART cannot cure HIV, but HIV medicines help people with HIV live longer, healthier lives.

Within 2 to 4 weeks after infection with HIV, some people may have flu-like symptoms, such as fever, chills, or rash. The symptoms may last for a few days to several weeks. Other possible symptoms of HIV include night sweats, muscle aches, sore throat, fatigue, swollen lymph nodes, and mouth ulcers. Having these symptoms do not mean you have HIV. Other illnesses can cause the same symptoms. Some people may not feel sick during early HIV infection (called acute HIV infection). During this earliest stage of HIV infection, the virus multiplies rapidly. After the initial stage of infection, HIV continues to multiply but at very low levels.

Without treatment with HIV medicines, HIV infection usually advances to AIDS in 10 years or longer, though it may advance faster in some people.

HIV transmission is possible at any stage of HIV infection—even if a person with HIV has no symptoms of HIV.

Symptoms such as fever, weakness, and weight loss may be a sign that a person’s HIV has advanced to AIDS. However, a diagnosis of AIDS is based on the following criteria:

Although an AIDS diagnosis indicates severe damage to the immune system, HIV medicines can still help people at this stage of HIV infection.

From Centers for Disease Control and Prevention:

From the Department of Health and Human Services (HHS):

From the National Institute of Allergy and Infectious Diseases (NIAID):